Over a quarter of their spending – half a million – was spent on overtime for police and staff. The figure includes a £850,000 grant the Metropolitan Police Service received from the Home Office. END_OF_DOCUMENT_TOKEN_TO_BE_REPLACED 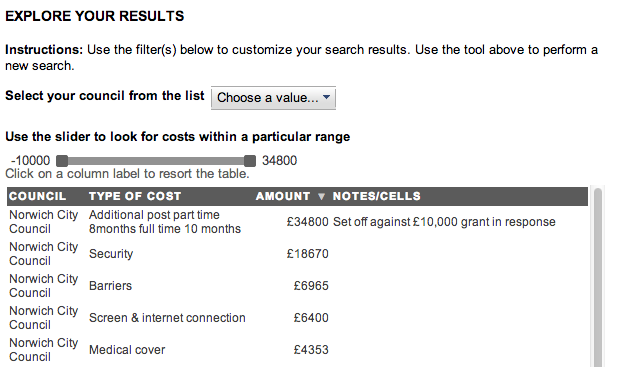 We’re opening up our database of £4m of spending based on FOI request responses from 100 local councils and police authorities.

As we reported last week, the responses contain some interesting budget decisions – from a specific staff position in one authority lasting 18 months to the excessive cost of bunting. What can you find in the figures?

Here are just some more that we’ve found:

END_OF_DOCUMENT_TOKEN_TO_BE_REPLACED

Data tucked away in the Ticketing Report by London 2012 confirms that the UK public’s ability to buy tickets for more popular events was significantly restricted.

The triathlon, track cycling, and ceremonies topped the table of events where low proportions of tickets sold to the public. END_OF_DOCUMENT_TOKEN_TO_BE_REPLACED

In a third post publishing cleaned data from the Ticketing Report by London 2012 we’ve extracted Appendix III: £20 or less tickets available by sport. The data is in the table below, as well as a Google spreadsheet here. END_OF_DOCUMENT_TOKEN_TO_BE_REPLACED

In our second post publishing cleaned data from the Ticketing Report by London 2012 we’ve extracted Appendix IV:  PYA [Pay Your Age tickets] Allocation by Sport. The data is in the table below, as well as a Google spreadsheet here. END_OF_DOCUMENT_TOKEN_TO_BE_REPLACED

Following the publication of the Ticketing Report by London 2012 this week (thanks Claire Miller for the tip), we’ve extracted some of the data buried within. First up is Appendix V from the report: Price category of sold tickets by Olympic sport. We’ve put this into a table below, but you can also copy the spreadsheet here (or view a webpage here).

Unfortunately, like a lot of data in this report, there is some vital context lacking – namely, how many tickets were available, as well as how many were bought. If you do anything with this please let us know so we can pass it on: END_OF_DOCUMENT_TOKEN_TO_BE_REPLACED

The Spreadsheet Journalism blog has published a set of data on all Olympic athletes from London 2012, including medals won, age, height, weight, gender, DOB and birthplace.

Let us know if you do anything with it!

Thanks to Muckraker‘s Lyra McKee for pointing us to this.

It’s now two months since we first gathered data on Olympic torchbearers. In that time people have appeared on the list and then disappeared, appeared late, appeared without stories, or not appeared at all.

Here is the data gathered across those 8 weeks – 7,041 torchbearers in total. If you can do anything with it, let us know.

The figure – published in the ebook 8,000 Holes – casts doubt on the promise by organisers LOCOG that 90% of places would be made available to the general public.  END_OF_DOCUMENT_TOKEN_TO_BE_REPLACED