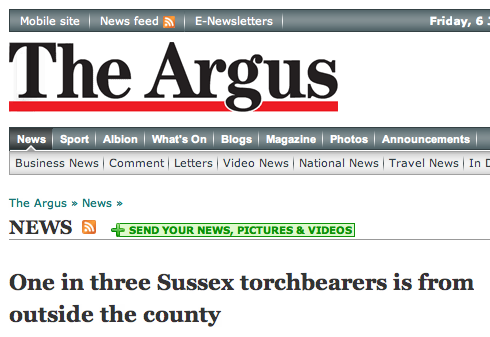 The Argus reports on corporate torchbearers in Sussex

The Argus in Sussex is the latest newspaper to ask questions of the allocation of Olympic torch relay places: “between the charity fundraisers, world record holders and people who have dedicated their lives to helping others,” reports Tim Ridgway and Charlotte Pemberton, “there will be Olympic officials and representatives from multinational corporations who live abroad. This despite organisers promising it would “enable local communities to shine a light on the best their area has to offer”.”

The Argus report comes on the heels of yesterday’s investigation by the Daily Echo in Bournemouth and Help Me Investigate’s work on the subject last month.

Among torchbearers identified by the newspaper are:

Gaelle Guerchet, of Malville, France – more than 500 miles away from Brighton – was nominated for being president of a sports group in Africa.

Another torchbearer Ximo Peris, 42, London, has been nominated for holding media workshops for school children.

Yet The Argus can reveal he actually created a film which was used by the London 2012 team when bidding for the games.

Julia Zeen, 30, a freelance graphic designer from Brighton, was selected to carry the torch through Lancing by sponsors Coca Cola.

She is currently designing the multinational’s range of pin badges for London 2012.

Among the comments, ‘Hove Actually’ says:

“This is rewards for the boys with a few locals thrown in to keep the masses quiet as usual, same as the tickets”

The article also lists a number of inspiring local nominees who missed out on torchbearer places.

A full list of people carrying the torch through Sussex, with those from outside the county highlighted, is also on the site.