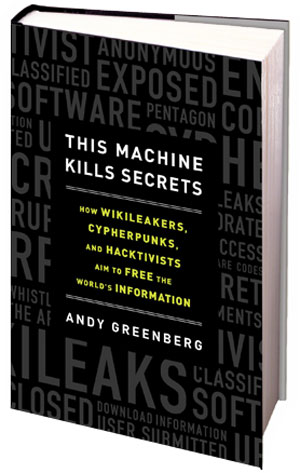 Note: this is a lengthy post so you may want to get yourself comfortable!

There is more to leaking than Wikileaks, and a more interesting tale to be told than theirs. In This Machine Kills Secrets, Andy Greenberg looks at that story – and it’s an important read for any journalist interested in working with sources in the 21st century.

The book combines a history of the leaks movement – from cryptography geeks and early document sites like Cryptome – to an overview of the proliferation of new, Wikileaks-inspired sites from Al Jazeera’s leaks site to Unileaks – many of which lack basic security.

Along the way there are insights into every aspect of leaking: the technology, organisational and human factors, the politics and the culture. It’s a timely book as the world embarks on a debate about privacy, security, and transparency sparked by Edward Snowden’s own latest ‘megaleak’. END_OF_DOCUMENT_TOKEN_TO_BE_REPLACED

Users of Help Me Investigate have been exploring the various legal issues surrounding recording council meetings. Although these are supposed to be public, some councils object to any form of recording, while others are happy to have them streamed live, and still others sit somewhere in the middle.

A key decision that motivated the decision was Southwark Council’s to allow audio recording of its meetings – but not video without prior permission.
The full ruling is particularly informative. It can be found at http://www.scribd.com/doc/44926864/Broadcasting-council-assembly-meetings-legal-implications
It mentions 5 areas for consideration, which I want to explore as part of an attempt to put together a guide for bloggers wanting to record public meetings:
In terms of data protection the document suggests that those attending public meetings will be considered to have given implicit consent to being filmed, and that clear signage that the meeting is being filmed – and mention by the chair at the start – should reinforce this. This seems sensible and reflects the practice of most television producers.
I’m not clear how audio recording might be affected.
The privacy issue is quickly brushed aside as the meeting is a public one and any issues are covered by the signage mentioned above.
“Procedural matters” seems to be a mix of retaining existing powers to hold part of the meeting in private, and asserting new ones. One of these is to interrupt recording if there is a disturbance, another to interrupt if a defamatory statement has been made. This is a curious inclusion, as the document itself recognises that council meetings are covered by qualified privilege – unless, of course, the defamatory statement is made in malice.
The final power allows the mayor to terminate or suspend recording if they “on advice” consider that continued recording may infringe the rights of any individual. This is a rather vague line and does not include a public interest exemption. The Local Government Act 1972, when stipulating instances where a meeting may take place in private, lists a number of reasons why this might be, but makes it very clear that public interest must take precedence in most cases.
The addressing of defamation demonstrates the curious priorities of local government. Once qualified privilege and other defences are explained two main fears come through:
The final passage on copyright gives the council an opportunity to retain control, saying that if they do with to enforce copyright they need to publish terms and conditions that include “any download or upload of the footage is not permitted without the written permission of the council and those featured in the same” It also suggests that users would not be able to upload the footage to sites such as YouTube because “you must be the copyright owner”.
However, copyright is actually held by the content creator – the person making the recording. If that person is not employed or contracted by the council then they can do what they wish with the footage, subject to any agreements made – and terms such as those mentioned above would be overly prescriptive.
This issue is fleshed out nicely in the comments to Jim Killock’s blog post on a similar issue in Brighton, where the exemption for fair dealing in reporting the news is also mentioned. Richard Cant puts the copyright point succinctly:
“The only copyright here belongs to Jason (assuming that he made the recordings himself). The council meetings are not literary, musical or artistic works. They don’t fall under copyright. That should be the end of it.”
There is a second issue here, which is that minutes of council meetings are normally not copyrighted (see this Birmingham City Council page for an example). There seems no reason why coverage of that meeting should be.
That’s as much as I can write for now. As we continue to flesh out the issues around recording public meetings I’ll post again. In the meantime, please help us out by joining the investigation here, or request an invitation by emailing paul at helpmeinvestigate dot com.