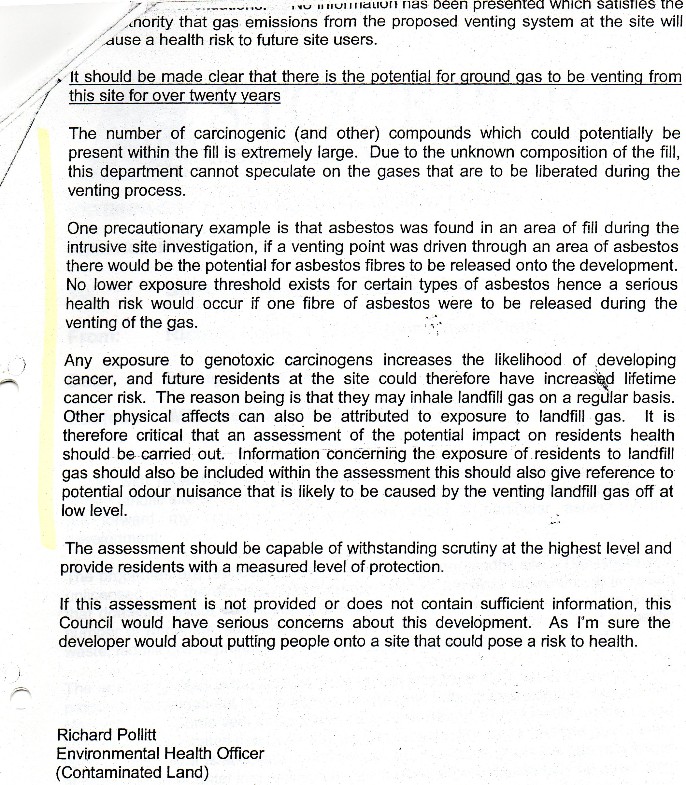 Sheila Oliver has been investigating the decision to build a school on contaminated land over at sheilaoliver.org/toxic-waste-dump-school-.html – the processes that should have been followed…

“After much harranguing by local residents the Council grudgingly carried out contamination investigations. These were completely inadequate, not on a strict grid pattern as is stipulated by BS 10175, no contamination pits at all were dug where the actual school was going, which is directly over the rubbish infilled claypits, intensively tipped, the Council admits, from 1954 to 1974 at a time when no records were kept. The planning application reference is:- DC024357.”

…and the attempts to evade FOI requests:

“Andrew Webb, Director of Children and Young People’s Services, states it will take 84 hours of officer time to read through the documents on the school “redacting” all the secrets before I could read it. It would cost £350 in photocopying time and paper and  £2,100 in officer time to remove the secrets. Request refused.

“I wanted no photocopies – just to read the documents.  I knew Mr Webb was not telling the truth.  How can there be so many secrets about one primary school that a council officer would have to work full time for almost three weeks to remove them?”

Plenty more on her site. Can you help Sheila investigate?