Benefits paid to prisoners have declined by 96 per cent since 2007 – but almost £21m is still missing because only half the money has been recovered to the Department for Work and Pensions, an investigation by Help Me Investigate has revealed.

The Department for Work and Pensions (DWP) centralised its benefits database in April 2012, prompting the decline in overpayments to prisoners: data provided in response to Freedom of Information requests shows that in 2007 the DWP paid prisoners £8.8m in benefits, but this figure dropped to £320,000 in 2013. END_OF_DOCUMENT_TOKEN_TO_BE_REPLACED 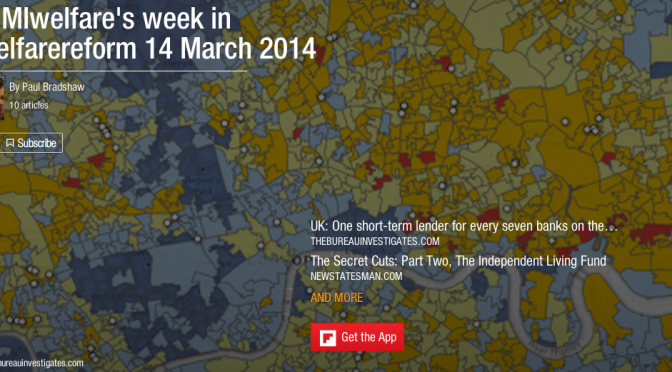 We’ve pulled together another 10 key stories from the last week into a Flipboard magazine. Let us know what you think – and if there are sources or stories we should be including.

Almost 1 in 20 households using the Sanctuary Scheme for people at risk of domestic violence have been affected by the removal of the spare room subsidy, reports Lorcan James.

Figures obtained from FOI requests to 79 Local Authorities show that from 2009, 281 households have been affected, meaning an average loss of £14 pounds per week. END_OF_DOCUMENT_TOKEN_TO_BE_REPLACED 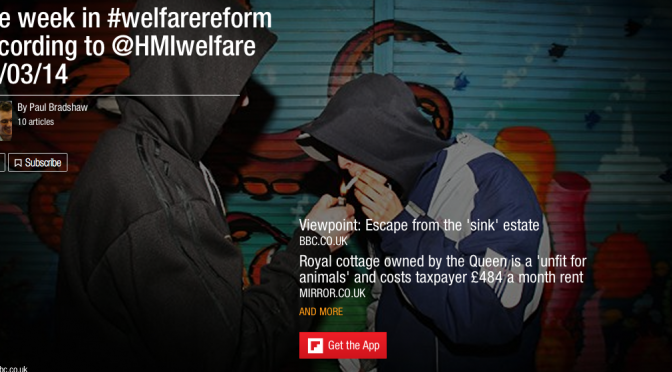 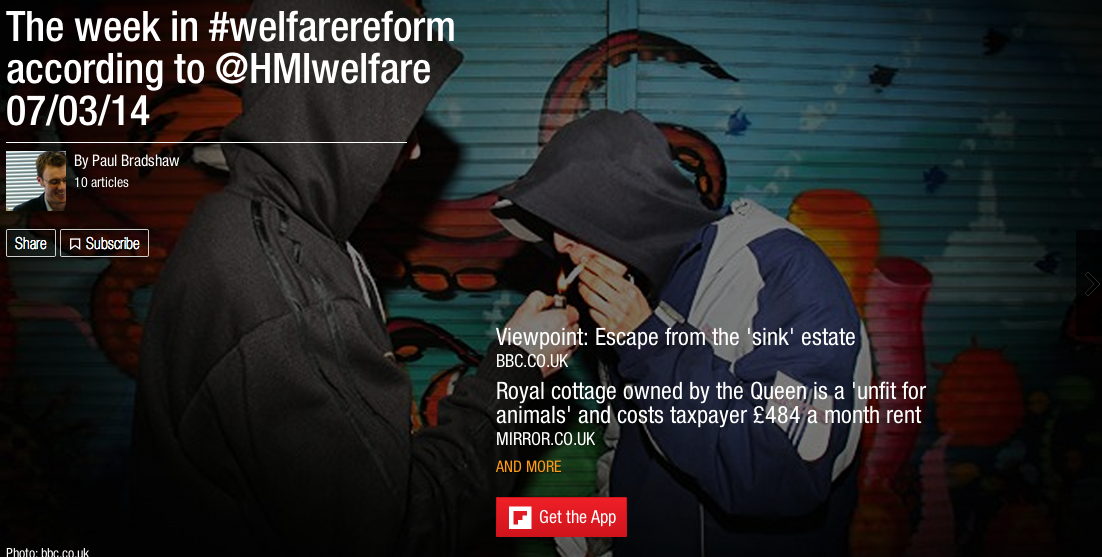 Once again we’ve rounded up some of the key updates from @HMIwelfare over the last week into a Flipboard magazine.

Stories include unfit royal housing benefit property, claims that food poverty is a bigger public health concern than diet, how the sale of small council homes condemned thousands to the bedroom tax, and an equality analysis of the planned closure of the Independent Living Fund.

We’ve rounded up 10 key welfare stories from the past week and put them in a Flipboard magazine. Click on the image below to enjoy – and scroll down to move from page to page. 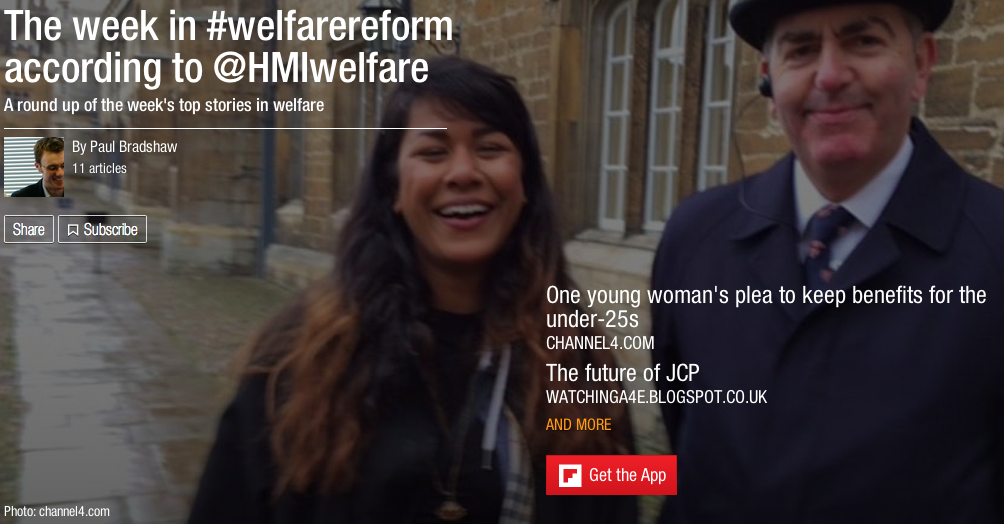 You can find a longer list of recent coverage on our Pinboard bookmarks. If you think we’ve missed anything, let us know.

Disability specialist Samuel Miller is taking the government to court in The Hague over possible crimes to humanity.

This northern housing consortium is running an eighteen month study tracking how people are living and coping with welfare reform across the north of England from April 2013 to October 2014. Real Life Reform are bringing together case studies of social housing tenants to capture not only the financial but also the human impact. END_OF_DOCUMENT_TOKEN_TO_BE_REPLACED

Twitter tool FollowerWonk has a facility for searching biographies on the site – make sure you select “search Twitter bios only” from the drop-down menu.

Try a range of terms: ‘welfare’ is normally used by those in official positions (or ‘social security’ in the US); ‘housing’ is a more specific term, as is ‘homeless’ or ‘homelessness’, ‘poverty’ and even ‘social’ (as in ‘social inclusion’).

You might want to look for users who mention an interest in specific issues like ‘bedroom tax’ or ‘workfare’, too, or organisations like Atos, A4e, and DWP.

For search methods and similar tools read this post on Search Engine People.

There are a number of directories for Twitter users. WeFollow works well with a general search for welfare but adding location seems to exclude a lot of relevant results.

Twellow allows you to narrow down to the United Kingdom, and particular cities, which helps exclude US results, but there doesn’t appear to be a way to use keywords and location together.

There are categories but these are very US-centric – so, no welfare or benefits, and the categories for ‘low cost housing’ and ‘affordable housing‘ bring up too many irrelevant results.

If you find a more effective directory please let us know!

It’s likely that someone else has already created a Twitter list covering the same or a related area. One way to find these is to look at the users you’ve already found and see what lists they’ve been added to.

You can find these by going to the Twitter user’s profile page and clicking on Lists to the left and then selecting Member of in the middle. The resulting URL should look like this:

…but with the username instead of USERNAME. Shiv Malik‘s list memberships, for example can be found at https://twitter.com/shivmalik1/memberships

You can also try to search Twitter lists. However, a number of tools that used to allow you to search these are no longer operating, so you’ll have to resort to some clever use of Google.

…and replace YOURKEYWORD with what you’re looking for (note that there is no space after the colon).

For example, with the keyword welfare it would look like this:

Sadly that only produces one result, because the list has to be called ‘welfare’ exactly – so this list wouldn’t match the search.

You can try omitting the “lists” part and using wildcards (asterisks) around your key term instead:

Or try broadening the search to something like this (replacing the phrase with your own):

This will bring back any list pages where one of the tweets mentions that term. Obviously this depends on what people are tweeting about at that moment in time.

As you start to follow people in your field, you’ll come across some terms and hashtags repeatedly. In welfare for example people will be talking about the bedroom tax, welfare reform, universal credit, housing, benefits, and other issues.

You can search for these on Twitter itself, or use Google with the phrase site:twitter.com (note no space after the colon) which limits results to Twitter.

Make sure you use quotes to get exact phrases only – e.g. “bedroom tax” will ensure you don’t get results that mention both words in separate places.

Hashtags of the same phrases are worth trying too: #bedroomtax and #welfarereform, for example are both widely used instead of the full phrase.

You can also try prefixing general terms with ‘uk’ – #ukhousing, for example, is often used by those within the UK housing industry to distinguish their discussions from those elsewhere.

Watch out for scheduled live chats too – #CABlive, for example, is used for discussions between citizens advice bureaus – and campaigns, like #PaydayWatch.

After your initial search it’s worth trying again occasionally – you can set up regular updates for a search using Twitter tools like Tweetdeck.

You can also use a tool like Hashtagify.me to find hashtags related to ones you already know.

Finally, look at the people you’ve already found and who they’re following and listing.

When you’re logged in to the Twitter website it normally shows a box on each profile page showing ‘similar accounts’, but clicking on ‘Following’ and ‘Followers’ will give you more suggestions – or you can just add those words to the Twitter account URL: a list of accounts that Patrick Butler is following can be found at https://twitter.com/patrickjbutler/following, for example

Do you have any other tips on finding relevant Twitter accounts to follow? Please let us know in the comments on @hmiwelfare

In the first part of this series I looked at bringing general news sources and blogs into one place; in the second I looked at social media discussions. This final part looks at how to know what government departments are saying and doing, even if no one is reporting it.

Data and documents provide some of the most useful leads for reporting: they tell you what the government is doing, and what it is being forced to reveal.

It’s important to understand that much of the information revealed by official government websites are the result of scrutiny by opposition politicians and Freedom of Information requests. This is how to find out when they do. END_OF_DOCUMENT_TOKEN_TO_BE_REPLACED

In the first part of this series we looked at bringing general news sources and blogs into one place. In this part we look to another important source: social media discussions.

Here’s how to add them to your Netvibes dashboard:

If you haven’t read Part 1, go here and read it now – it contains instructions on how to get started with Netvibes you’ll need to follow first.

Done? OK. That post mentioned the Netvibes ‘Essentials’ menu a couple of times – another option there is the Twitter search.

This is useful for bringing social media discussions into your netvibes feeds.

The key thing here is to keep the search specific by using quotation marks – or by using hashtags. END_OF_DOCUMENT_TOKEN_TO_BE_REPLACED